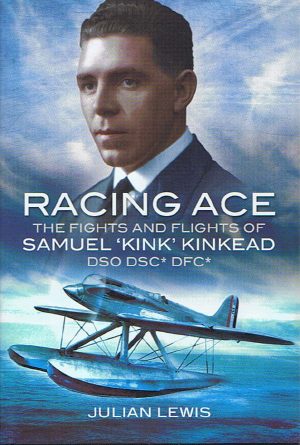 Samuel 'Kink' Kinkead won two DSCs with the Royal Naval Air Service, two DFCs with the fledgling RAF and the DSO in Russia. A brilliant pilot, post-war he was a long-range aviation pioneer and leading racing ace selected for the international Schneider Trophy race in Venice in 1927. Tragically he was killed, aged just 31, in 1928 attempting to shatter the World Air Speed Record. He is honoured by several memorials: at Cranwell, the RAF Club in Piccadilly, at Fawley and by a permanent exhibition in the Kinkead Room at Calshot from where he set out on his final flight. Julian Lewis MP has pieced together Kink's extraordinary story of achievement during his short but eventful and glamorous life. A fascinating account of flying derring-do both in war and in peace.

An extraordinary biopic of an extraordinary, larger-than-life man. Thoroughly readable. This man could almost have been one of the inspirations for Biggles, but you have to remind yourself that, nearly a hundred years ago, such men were pushing the boundaries of air speed and safety beyond practical limits. A daredevil, an inspiration and a legend. Stirring stuff.

... an outstandingly well-researched and many-faceted biography in which the author has skilfully interwoven the events of his hero's life with contemporary political, social and technical developments ... his narrative of the obscure events in southern Russia is as fascinating as his exposition of the terrifying difficulties of handling temperamental seaplanes ... A remarkable story of a remarkable man, in the tradition of a rattling good yarn, and most warmly recommended.

Julian Lewis is a sometime MP and Shadow Armed Forces Minister. More significantly, he served as a seaman in the RNR and earned a Doctorate in Strategic Studies at Oxford. No doubt these disparate elements of his life contribute to his refreshingly different style of writing. His research has been impeccable and amazingly comprehensive ... [Lewis] takes this information and weaves it together with contemporary debates on strategy and policy at the highest level. The result immerses the reader in the events and gives him a feel for life in the early flying services ... The final chapters of this book are remarkably poignant and revealing of the man. The reporting is often beautiful and the author is clearly moved by the events. As the book's cover observes, with accuracy, this 'is a gripping tale of dauntless courage and derring-do - Biggles with a sad ending'. Read it! You won't be disappointed.

This is a masterly exposition of storytelling about a gallant young man who died flying at the age of thirty-one. Yet, in those years, he did more than most in a lifetime three times longer. To do his memory justice, Samuel 'Kink' Kinkead has Julian Lewis as the storyteller who brings an extraordinary life into focus ... It is not just about air warfare in its earliest days - although Julian Lewis turns a forensic historian's mind to some new facts and assessments - but also long-range aviation and the quest for speed in the 1920s ... Julian Lewis's detective story is worth a book in its own right ... Kinkead seems to have been an intensely personal man who left little in the way of letters or even notes ... It is by telling the story of this extraordinary pilot in the context of the campaigns that the book gains its depth ... Julian Lewis's book brings Kinkead alive and reveals facts about early aviation that have for too long been kept in dusty archives.