The Story of the Kincaids 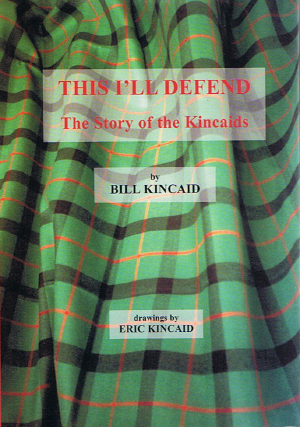 In 1812 a disastrous fire swept through a store room in Scotland destroying family papers, portraits and possessions of the Kincaids of Kincaid. This irretrievable loss has since made it difficult for the family to trace its genealogical history and understand its origins. Are the Kincaids descended from Archil, the Northumbrian lord who fought William the Conqueror in 1089 before fleeing to Scotland, or from Gaelic roots? Who was the man who was given the lands of Kincaid by the Earl of Lennox in the thirteenth century? Did a Laird of Kincaid lead the successful assault on Edinburgh Castle in 1313 to wrest it from the English? When did Kincaids first move from Scotland to Ireland? These questions, and many more, have vexed Kincaid researchers for many generations.

Bill Kincaid has researched Kincaid family history over the last forty years and in this book he sets down the history of this ancient family with all its glory, its heroes and its black sheep. He traces the Kincaids of Kincaid, as well as those branches which flourished away from the family heartland: in Linlithgow, Falkirk, Edinburgh, Glasgow and Greenock; in Dublin and the Irish counties of Down, Londonderry, Donegal, Tyrone, Sligo, Antrim and Limerick; in Africa, India, the United States, Australia, Canada, Argentina and Holland. It is the story of a family which, over the course of centuries, changed from landowning barons, engaged in bloody feuds with their neighbours, into royal couriers, lawyers, city governors, doctors, churchmen, merchants, industrialists, soldiers, sailors and airmen, as well as assorted rogues and troublemakers. Their story is set in royal palaces and on battlefields, in merchant houses and shipbuilding companies, in law courts and council chambers, in surgeries and churches in many different lands, against complex political, ecclesiastic, military and economic backgrounds.

"This book ... cleverly draws together, in refreshingly accessible and interesting form, a vast tranche of knowledge of our kinsmen and forbears. It is a celebration of the diversity, talents and achievements of numerous Kincaids over many centuries." Madam Arabella Kincaid of Kincaid.

"I really enjoyed the draft of your forthcoming book on the Kincaid Family. Matter of fact, I read it twice - once on the computer and then I printed out a copy to read in a more comfortable position. During both readings, I realized new facts about Kincaids that I didn't know before. It was hard to put the draft down even to take time out to eat dinner." Jim Kincaid, President Clan Kincaid 2003

"This is an amazing work of scholarship detailing hundreds of Kincaids from virtually every walk of life and every corner of the globe... This is a well-written and enjoyable history of a family, interwoven with social history. The story told will parallel that of emigrant Scots worldwide. The book is meticulous in its detail and fascinating in its content, and the inclusion of detailed family trees, extracts from contemporary documents, maps and bills and photographs, complete a prestigious volume." Diana Howden and Janet Hole, Family Tree Magazine, 2003

"Over the past 40 years Bill Kincaid has carefully researched the clan's history and the dispersal of members around the world from its heartland north of Glasgow, a task made more difficult thanks to a disastrous fire in 1812 which destroyed most of the Clan's papers. In this handsomely produced and illustrated book, the author tells the stories of some of the holders of the name." Family History Magazine, No 98, November 2003 How to order this book:

From Bill Kincaid Send a personal cheque/check made out to J.W.M. Kincaid to Bill Kincaid, 10 Crutchfield Lane, Walton-on-Thames, Surrey KT12 2QZ, United Kingdom for the amount below. Include your name and postal address. billkincaid@btinternet.com